The Critical Factor is not Red or Blue, but You.

As the battle for the White House heats up, candidates are drawing attention to the challenges facing the 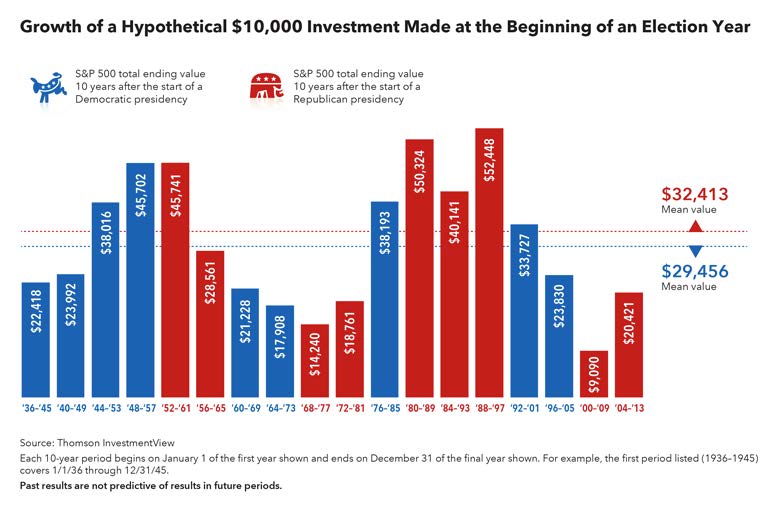 nation--everything from economic instability to immigration. With all this negative campaign rhetoric, it's no wonder investors grow more concerned. However, history shows the value of not giving in to election-year fears.

In fact, investing during election years has almost always turned out to be a good idea for long-term investors as you can see in this chart. When preparing to invest, however, the most important decision that needs to be made is deciding to commit to the long-term big picture. This commitment is what helps you ride the natural ebb and flow of the market.

As you can also see from this chart, it doesn't really matter whether Republicans or Democrats are in office. Investment success really depends more on the strength of the U.S. economy, which, according to Mike Kerr, portfolio manager at Capital Group, there are many reasons for optimism about the future of the U.S. Please watch U.S. Outlook Bright-and Only Getting Brighter if you would like to hear more from Mike Kerr.


"The Tortoise, in the meantime, continued to plod on, albeit, ever so slowly. He never stopped, but took one good step after another."  "The Hare dashed as quickly as anyone ever could up to the finish line, where he met the Tortoise, who was patiently awaiting his arrival."

The Tortoise and the Hare an Aesop Fable